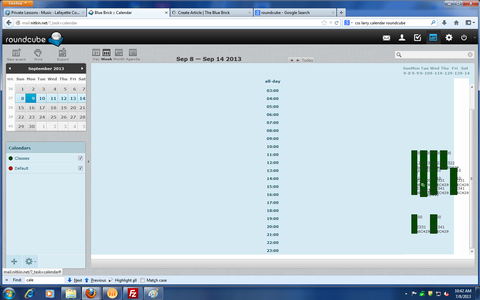 I'm just not _that_ into the time of day. 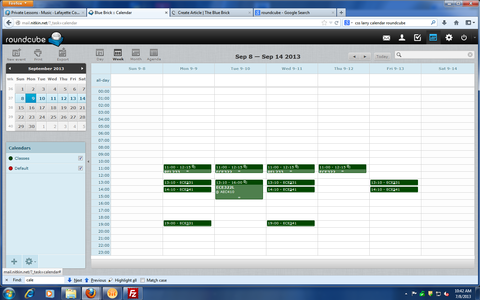 A little cramped, but much better.

Roundcube is the email client for nitkin.net. In addition to being functional, it's very pretty (as opposed to, say, SquirrelMail) and extensible. I thought it'd be neat to add a to-do list to the client, and found a calendar while I was at it.

Unfortunately, the calendar was very, very ugly. Not a poorly-styled sort of ugly. A something-is-wrong sort of ugly. (See before and after pictures, above.)

After poking around a bit with Firefox's Inspect Element tool, I found the problem. The whole page was formatted as a CSS table, and the width of the elements was way off. (1101 px for the times and 6px for the dates, respectively.)

But that width wasn't specified in the CSS files, nor was it given in HTML. I tried a different troubleshooting tack - switching Roundcube's skin from Larry back to the older Classic. That worked. Although Roundcube didn't look nearly as slick, the calendar worked properly.

Armed with better search terms, I poked around online for people who had trouble with "roundcube calendar css larry". One old post suggested that the CSS provided for Larry was incomplete, so I took a look.

Naturally, filesizes changed between the two versions, but none as dramatically as fullcalendar.css. In the Classic skin, it's a 12kb file; in Larry its only contents are:

It looks almost like the Calendar developers wanted to redirect one to the other to save a few kb. But that line doesn't actually do anything - Firefox tosses it as invalid CSS and moves on.

Copying the full version of fullcalendar.css from Classic into Larry worked perfectly. The calendar's readable now!

Next, I want to see if I can get RoundCube to support multiple IMAP accounts - I'd like it to be a command center for email, tasks, and scheduling, so it needs to support my Lafayette and Gmail accounts.