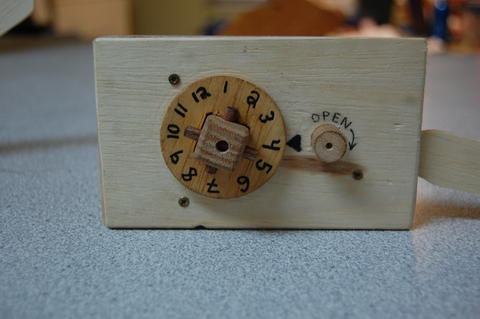 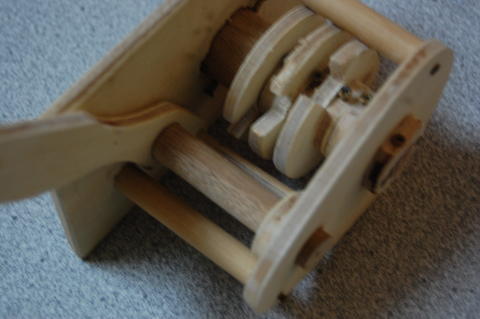 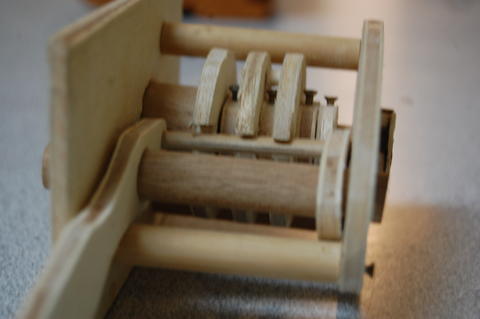 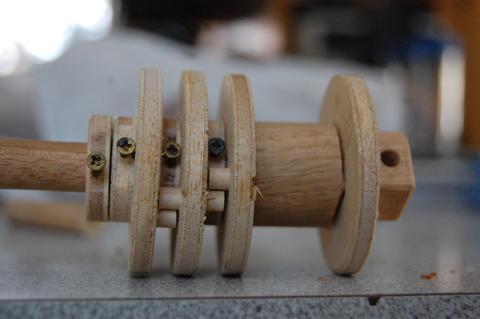 School starts, and I'm busy again. I have all sorts of cool things to write about, and not enough time to do so. But I'm on top of homework, so here's the conclusion to the combination lock saga!

I wish I could describe the measurements better, but that's a job for engineering drawings, not text. I'll see about making some proper drawings soon.

After deciding on about half the dimensions, we started cutting. The tumblers and washers were first, then I popped a few dowels onto the lathe to turn them down a bit. When I finished, the tumblers spun smoothly on the central shaft.

We assembled the core of the lock with brass screws. First, we slid a washer onto the central shaft, then a tumbler, another washer, and so on until it was built up. After a quick test to make sure everything interfaced well, we screwed the washers into the central dowel with brass screws, being careful to keep the tumblers under a bit of pressure (to prevent wobble and slippage).

We made a few pieces for the latch: a pair of arms (one long, one short), a small dowel to drop into the locks' slots, and a large dowel to pivot around. After screwing those parts together, we installed the latch and core into the lock's frame. A few dowels held the two faceplates of the frame a healthy distance apart. We assembled the locks and played around a bit. They worked flawlessly!

Almost. Quite intentionally, we hadn't cut the keyway slots yet, as we weren't sure where they'd line up. With the locks fully assembled, we dialed in the desired code, marked the tumblers with pencil, took the lock apart, cut the slots into the tumblers, and put everything back together.

And voila! Locks! Lots of planning, a few days of work, and we had a pair of working combination locks. They don't attach to anything, but you can dial in a combination and draw the latch back. It's pretty cool. I'm thinking of trying a keyed lock next.