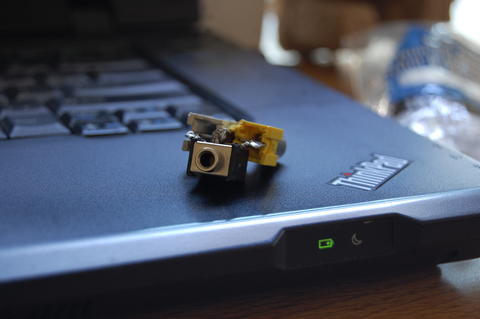 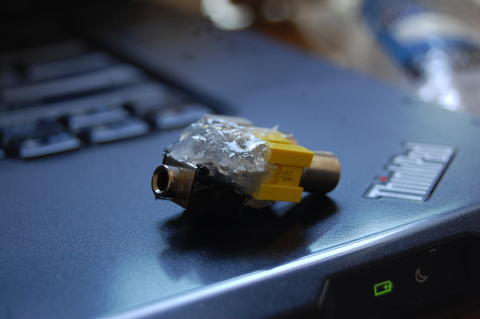 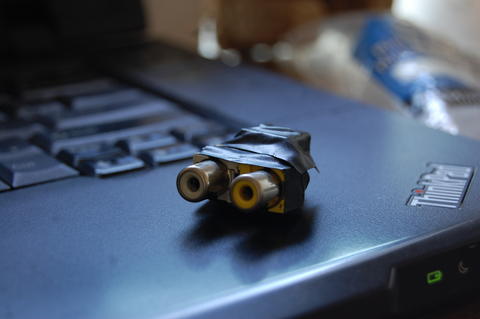 A while ago, I found some electrical solder. I was excited. So much so that I had to hammer out something random, using parts I had on hand. The result was an adaptor that would connect my computer's 3.5mm sound output to a stereo's twin RCA inputs.

As I've said before, it worked perfectly. With one qualifier. It just broke. The 3.5mm jack I used had fairly flimsy legs, and they gave up after a few weeks of being bent back and forth.

I decided to rebuild it. Initially, I planned to replicate the design, using some bits of wire to replace the broken leads. No cigar - there wasn't enough metal exposed to solder to. Even burning back the plastic bits of the connector failed. Rather than exposing more metal, the plastic oozed everywhere, preventing recovery.

Plan B was to find another 3.5mm adaptor, and use it. Plan B fell through when I realized that the ECE department here doesn't stock random things like audio adaptors. But the clubs do. One trip to the ECE lounge later, I was the proud new possessor of a broken computer, complete with a soundcard. After a little finagling, the side popped off. The jack came out shortly later.

After a bit more finagling (the department doesn't have 3rd hands, so I made one from pliers and a vice), I finished soldering the connector together. I took it home, potted it in hot glue, and rewrapped it with electrical tape. Why hot glue, you ask? Because it's all I have. If I had two part epoxy instead, I'd have used that. Or JB-weld. Or anything that would prevent another failure.

Final notes: The new adaptor is female, instead of male. Fortunately, male-male 3.5mm cables are fairly common. They also make the system more Goldbergian and convoluted. Perhaps it's my imagination, but I fancy that the new adaptor looks a bit like a starship, with two RCA engines at the back and a tiny little 3.5mm cannon on the front. It even includes visual cloaking. Okay, camo.