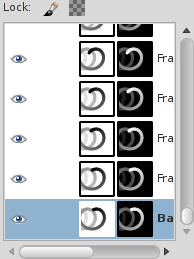 This is a personal site, for logging the various projects and such that I do. Since it came online last month, I've been working to brand the site to bring it away from default Drupal. Creating a theme helped, but I'm still using default icons. I want some sort of logo to identify things I make as my work, but I'm not sure what. In short: branding a site takes time.

In the meantime, I wrote a short Processing sketch to generate a cool looking favicon, which I may replace after deciding on a logo. The sketch draws a throbber (like the one that YouTube shows as it loads), which is pushed to the left as its drawn. The result is a fading helix.

A static version of the favicon on the left, and the animated version should show on the left side of the address bar or tab.

EDIT: The original looks great against itself, but a black square on a gray tab is terrible. Editing the processing sketch to yield transparency was fruitless, so I went back into GIMP and gave each layer a mask that was a greyscale copy of itself, then inverted all colors. Now the favicon is a black throbber with a transparent background. I much prefer it.